Our use of language is an interesting thing. Before my holiday the media has been full of stories about the migrant crisis. I've not met anyone here yet who calls these people migrants. They are always refugees. A subtle difference. But one that perhaps recognises the complexity and history Europe has with those in flight.

I've spent some time talking to locals and trying to understand the situation. The facts first - people have always crossed from Turkey in boats. Usually not many and without much notice. But in the recent months it has become an overflowing tide of boats. Each day 30, 40, 50, 100s of people arriving. With no set schedule or idea of even where they will land. The Turkey facing shore has a couple of likely stopping off points. Pot luck. They are from a mix of countries. And not all war torn - Pakistan, Syria, Afghanistan seem to be the main source. But all in search of one thing - "a better life". Even the arrival isn't straightforward though. If they land on the rocky beaches and walk on to shore then this means the authorities do nothing with them. Until they get their papers from Mytilene they cannot spend any money, nor can they use transport and it is illegal for Greeks to drive them. So they must walk. Everyone. If they are rescued from the water then they are processed and can await transport to take them to Mytilene. According to some locals even this is unclear. Believing that in the beginning they were all offered transport but due to the numbers arriving it was stopped to make it less attractive to land in Lesvos. There are also now tales of some of the traffickers splitting the boats to ensure people enter the water so they get transported. Remember those in the boats range from young babies to the elderly.

Once in Mytilene the refugees are placed in holding areas until they can be transported to the mainland. The ferry can take 1800 but there is only one a day. However they are able to spend money now and buy food and supplies. They haven't come here with nothing. They have come to start their lives again. The holding camps in Mytilene have started to create perceived problems and the locals here talk of fights and problems. I read before I came that sanitation was an issue and many migrants protested at the conditions they were being kept in. I haven't seen it so can't comment.

Generally though everyone is agreed they cause no trouble - especially in Molyvos. No begging. No stealing. But they have begun to upset businesses and those who earn a living from picturesque Molyvos harbour are worried about this and want them gone. "It's a difficult position". Apparently the ex-Mayor of Molyvos said let them come to a non-tourist area of Lesvos and we'll arrange transport. That way we will help them but it won't impact on tourists.  As someone put it the people themselves aren't causing trouble - but indirectly they're causing a lot of trouble. 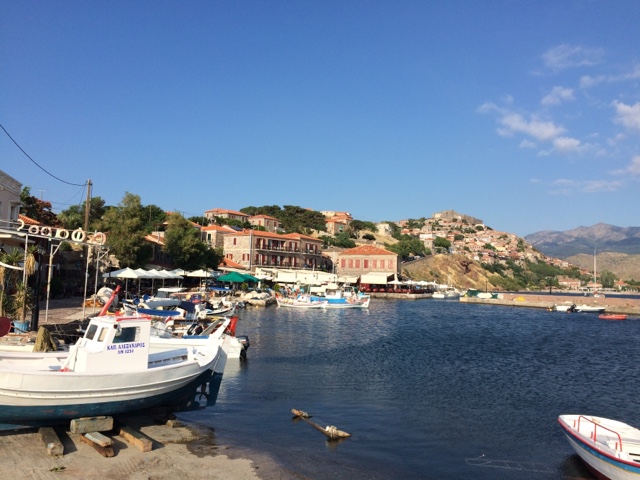 So, a compromise has begun. With a group of people in Molyvos working together to try and provide some humanitarian aid. These are mostly ex-pats from other European countries. Not Greeks. "The Greeks will not look after them" is a phrase sometimes used. Why not? It's complex but mostly it seems fear. Although a nation of refugees themselves they are not used to the strangeness these people bring. Sadly many countries across Europe seem to feel the same. But Greece is a country on the edge - "you want to help them but we can't. Europe know the situation we are in, it's time Europe did something".

However Europe is doing something as what this small group of mixed nations have achieved with no formal support is amazing. Establishing a quiet camp outside of the view of the harbour. Providing basics in terms of food, water, shelter and advice on what to do next. A chance to dry off. To catch breath. 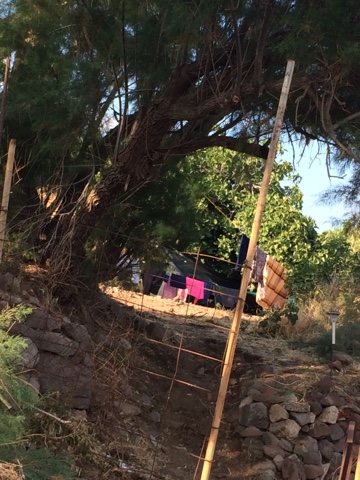 My first visit to the camp on Tuesday I met Fami - from Denmark but native in Arabic and now spending his summer doing what he can. He is able to translate and give advice. They make sure to ask everyone where they plan to go and advise on which European countries they shouldn't head for. The list of places to go is short. And I was embarrassed the UK wasn't on it. We are now an "unfriendly" destination. No longer a safe haven for people in need. But somewhere that doesn't want to get involved. These people spend their days and nights doing what they can. Reliant on volunteers, donations and good will. They have no support from the EU, the UNHCR or Greek government. Everyone is tired. They have jobs and livings to make also so after helping refugees many then work long hours in restaurants or local businesses.  Tuesday was a quiet day. 11 had arrived from Afghanistan. They were all friendly and polite. Most wanting to go to Sweden or Holland where family was already waiting. They were hoping for a bus to take them to Mytilene. But no one knows when these will come.

I left having given a small donation and a vane attempt to fix a phone so it could make calls. Sadly my knowledge of Samsungs and lack of Afghan meant I wasn't much help. But we made a promise to return to provide more practical help. People who can volunteer gather each day at 9am, 2pm and 8pm to see what they can do. As we were told "if there are people here - you help, if not you have your holiday".