A tragedy of our making?

Our next visit to help was two days later on Saturday morning. We were determined not to cause any problems! This time as we arrived at The Captains Table there were two Australian women offering to help and a younger woman all also on holiday. As well as a Dutch lady who owned a shop in the harbour. There was no one at the camp in the harbour but about 70-80 people down at the bus stop.  So we would all be needed. 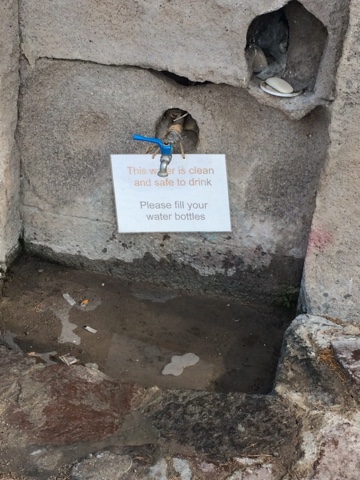 It turned out that having helped once meant Keeley and I were trusted to know what we were doing. So the new helpers set about making Nutella sandwiches as we loaded the car and climbed in to feed those at the school. Apparently some locals have said they must stop feeding arrivals. Melinda's sandwiches are causing these people to come here! We laugh about how even in Afghanistan people are talking about Melinda's sandwiches!
When we arrive we find large groups of people spread out across the vast car park. They are sitting in the groups they arrived with, coming from a variety of conflicted countries - Syria, Iraq, Afghanistan and Pakistan.  Local wood carver Eric and his wife Phillipa are also there doing what they can.  At one point they hand out toys to the children there. Children will always be children. 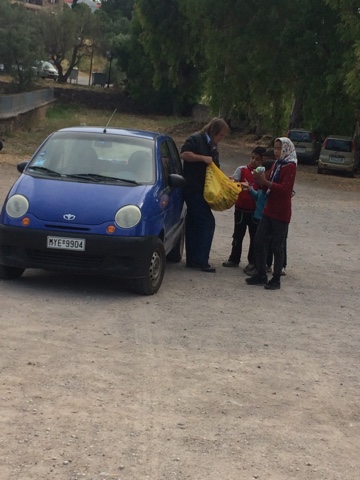 We set about our simple task of giving a cup of milk, a sandwich, some fruit and water. Children also got a croissant. Everyone lines up patiently and says thank you as you give them what seems so very little. Today though there was some more excitement as not only was a Danish journalist taking photos we had two men who had been interpreters for the U.S. Army who were acting as interpreters for us. Once we'd finished handing out food we were able to start finding out some more about who we had been serving. 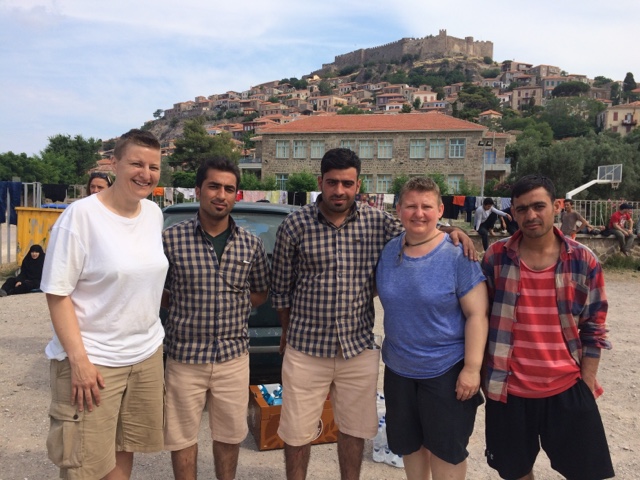 Rock and his friend had worked for 5 years for the Americans, they were clearly very proud and still wore their uniforms. When the Americans left they gave them money and now that money has mostly run out and he said they were frightened and needed to get out. They hoped to head to Sweden and work as interpreters. There was also an 80 year old woman sitting quietly, her family wondering how she would make the next part of the journey.
After eating Fami and Melinda began to explain that no help would be coming and they would have to walk to Mytilene. I doubt this gets easier for them. They have maps which mark out the water stops, the mid point at Kalloni and their end destination. It's hard for them to grasp. "No car?" "No taxi?" - all you can do is set them on their way and hope someone takes pity and gives them a lift. Slowly they all begin to gather their things and start drifting off towards their end goal. We wish them luck. The photographer clicks extreme close-ups of weary faces. 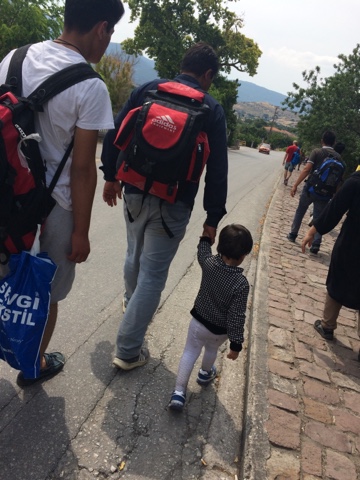 It's a brutal routine. Fami tells us later how the day before he was in the same car park yesterday talking to his wife and suddenly he broke down in tears. There is only so much the human heart can take. We watch as even the 80 year old woman eventually rises with her family and begins to walk.  All we can do is hope they find a lift.
Those that leave generally clean up as they go but with so many today Keeley and I put on disposable gloves and clear up anything missed. This exposes some of the undignified lives these people now lead. We find nappies, sanitary items - all having to be used in the exposed car park as there are no toilets there for them.  There is hope that temporary toilets will be put up soon for people to use. 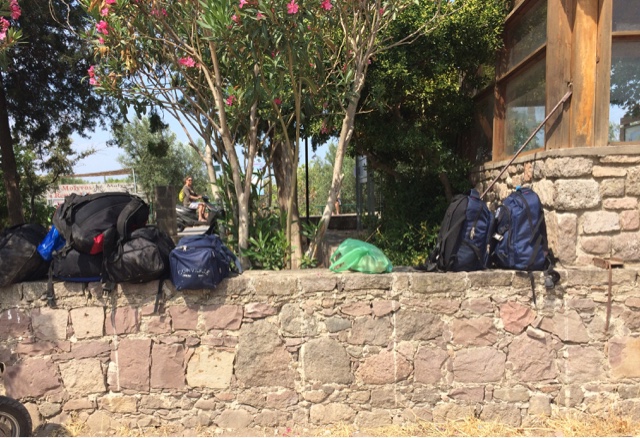 When we return to the storage area to unload our Australian helpers have made nearly 200 sandwiches. They are on holiday - celebrating their first visit to Lesvos 40 years ago. Di explains they didn't expect to be doing this but feel so ashamed at how Australia is treating their migrants they had to help. She's off to Cambodia next year. The other young woman now lives in Germany - she remembers fleeing her home as a 6 year old and felt she couldn't ignore others doing the same.
It's a random international group thrown together to try and help - it makes you wonder how those at the top of our international trees can't do the same? 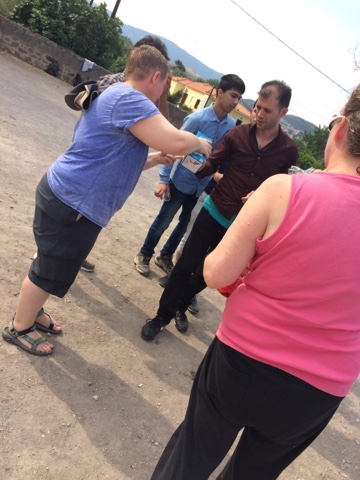